Here you’ll find some of most picturesque locations with worldwide known Barcelona landmarks for sketching workshops.  I’m taking into account how conveniently are situated these buildings in terms of depicting. And it’s important to have possibility to choose convenient distance for sketching.

Basilica of the Sagrada Familia 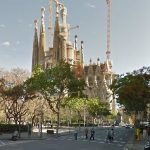 Gaudí’s conception of the Sagrada Familia was based on the traditions of Gothic and Byzantine cathedrals. His intention was to express Christian belief through the architecture and the beauty of the building and communicate the message of the Evangelists.

Basilica of the Sagrada Familia is very conveniently situated in terms of depicting. You may observe it from many different points of view and you may choose convenient distance too. 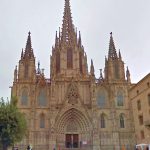 Construction of the magnificent Gothic Cathedral of Barcelona commenced on 1 May 1298, on the site of a Romanesque temple. The work was carried out in three stages over 150 years. The facade and cimborio were restored between 2004 and May of 2012; that work has not yet been completed and includes restoration of the rooftops and the bell tower.

The main facade of the Catedral de Barcelona  is conveniently situated for observing — there is a big square in front of it so you may choose convenient distance. 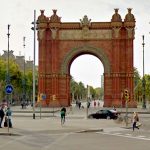 This beautiful arch was built on the occasion of the Exposición Universal de Barcelona — the universal exposition of 1888. The triumphal arch was situated at the end of a wide promenade and served as the exposition’s main entrance. The design of the arch made by the Catalan architect and artist Josep Vilaseca i Casanovas.

Arc de Triomf is very conveniently situated in terms of depicting. You may observe it from many different points of view and you may choose convenient distance. 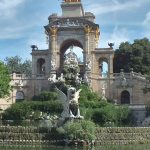 The Cascada is located at the northern corner of the park Ciutadella. It was erected by Josep Fontsére and to a small extent by Antoni Gaudí, who at that time was still an unknown student of architecture. Fontsére aimed to loosely make it bear resemblance to the Trevi Fountain of Rome. It was first inaugurated in 1881.

Cascada is conveniently situated in terms of depicting. You may observe it from many different points of view inside of Parc de la Ciutadella. 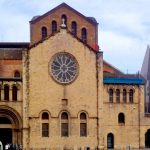 The first church in this place was built in 1265. In the middle of the XIV century the church became a monastery, then here was created a shelter for the poor and a house of mercy, which lasted until 1957. In this territory later was built the complex of the Museum of Modern Art. The building was again transferred to the Catholic Church in 1965.

In front of the church there is a large area, which allows you to choose a convenient distance for sketching. 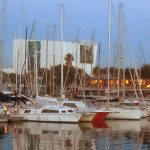 Port Vell (literally in English ‘Old Harbor’) is a waterfront harbor and part of the Port of Barcelona complex. It was built before the Barcelona Olympics in 1992 as part of the urban renewal program. Before this, it was devastated area of empty warehouses, factories and railroad yards.

Port Vell is very conveniently situated in terms of depicting. You may observe all kinds of yachts and catamarans from mostly convenient points of view. Long embankment allows to choose proper distance to the choosen ship. 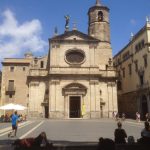 The Basilica of Our Lady of Mercy (Catalan: Basilica de la Merce, Spanish: Basilica de la Merced) is a Baroque-style basilica in Barcelona, Catalonia. It was built between 1765 and 1775,[1] being the work of Catalan architect Josep Mas i Dordal. The dome of the church is crowned with the iconic statue of Our Lady that is visible from the seaside promenade. This church was the second in Barcelona to receive the title of a minor basilica, preceded only by the Barcelona Cathedral. The title was granted in 1918 by Pope Benedict XV, commemorating the seven hundredth anniversary of the apparition of the Virgin to St. Peter Nolasco, founder of the Order of Mercy.

In front of the church, there is a large area, which allows you to choose a convenient distance for sketching. 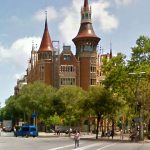 The official name for La Casa de les Punxes by Josep Puig i Cadafalch is Casa Terrades — a little dull for this magnificent House of Spikes. Owing to its location on Diagonal on the corner of Carrer Bruc in the Dreta de l’Eixample, it’s one of Barcelona’s emblematic buildings because it is a reference point as you drive in and out of the city.

Casa de les Punxes is very conveniently situated in terms of depicting. You may observe it from both sides of the wide Avenida Diagonal using many different points of view. 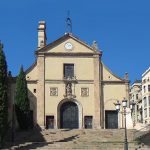 A gem of Catalan Baroque architecture Church of The Virgin of Gracia and St. Joseph (Josepets) is placed at the northern end of the former village of Gracia. It was built in 1687 by Brother Jose de la Concepcion following the traditional canons of the Catalan Baroque, while the three-tiered facade topped with a triangular pediment. It is common in Carmelite churches of the period.

In front of the church there is a large area, which allows you to choose a convenient distance for sketching.

If you want to order a workshop or have a question, please write to me using contact form below: